Robotics engineering is an exciting and challenging field of study with enormous practical benefits for humanity. However most people associate these perceived benefits with a distant future, unaware of just how integrated robotics already are in our day to day lives. With driverless cars currently in development and drones expected to to be used in a delivery capacity in the very near future this is only expected to increase over time as technological advancements bring robotics ever more rapidly into our lives.

Essentially robotics engineering is a combination of computer science, electronics, programming, signal processing and systems engineering. It's important to understand that a career in robotics doesn't mean you will be building the next R2D2. In the main robotics are largely used for the automation of repetitive tasks such as those associated with production lines in manufacturing environments e.g. vehicle production.

The advantages to this are many and include:

To work in the field of robotics, most engineers get their degree. Specific Robotics Engineering programs, especially at the Bachelor’s degree level, can be tough to find, so some people decide to go into a related field of Mechatronics, Electronics, or Mechanical Engineering. Below are a few featured online programs at multiple degree levels that may be of interest to you.

The education required for a job in the robotics industry can begin quite early. Many high schools in America are adding robotics programs to their after school agenda. Botball and FIRST Robotics Competition are two programs available that students enjoy while learning valuable skills that will  help promote them towards a career in robotics. There are also many summer robotics camps available for students to absorb themselves int he world of robotics.

There are some universities that have bachelors, masters, and even doctoral degrees in this field, but online options are very limited. Vocational schools also offer training directed toward entering a career in robotics or electronics.

The Future of Robotics Engineering

As robotics become more integrated into our working lives, it’s recognised that there will be some quite dramatic changes to how they engage with us. At present robots for the most part don’t resemble the type of robots we associate with sci-fi movies. Rather they resemble machines designed to perform a specific task such as a robotic arm working on a conveyor belt.  However this is likely to change as robots begin to work side by side with humans. As a result they will need to be more relatable to humans and appear more lifelike. The video below shows arguably the most realistic robot developed up to this point.

As you can see the technology is still far from perfect but the advancements made in just the past 5 years are dramatic.

The world of robotics  is a growing one that is only expected to expand further as technology advances and the need for automation grows as employers see the benefits in robotics and the cost of the technology required decreases.

Engineering positions associated with robotics often entail designing and maintaining robotics technology as well as developing new uses for them. Almost all modern factories utilize some form of robotics to perform repetitive tasks that can be done faster by a robot than a human without ever getting fatigued or there being a reduction in efficiency. 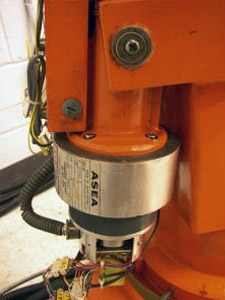 The field of robotics has been steadily growing in recent years and the demand for robotic engineers is expected to increase by more than 13% over the next 5 years making it one of the best engineering degrees available for the future.

Robotics-related employment is on the increase as demand grows and technology advances allowing robotics to be used more extensively. It is already essential to most manufacturing environments and is proven to increase production.

Robotics in the Military

Another area where robotics already play a role is in the military, where robots have been used as far back as WW2 for detecting mines. Unmanned aircraft are used extensively to gather intelligence, while remote controlled armed ground robots have been used in Iraq in a limited capacity already. This is just the beginning with Robots expected to actively participate in combat and eventually help reduce the loss of human life while in combat.

It is also expected to expand into industries currently not utilizing robotics (or only in a limited capacity) such as the medical field, particularly surgical procedures where robotics are already being tested and emergency services such as fire and rescue. The future of robotics engineering is an exciting one with plenty of scope for advancement and secure employment over the long term.